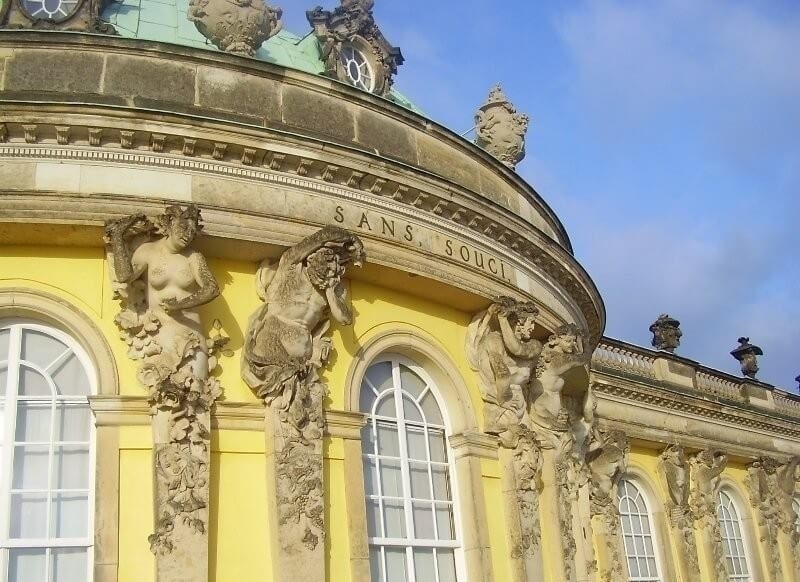 With this article we would like to introduce you to some of Potsdam’s most important sights. Potsdam has a lot of attractions to offer. Therefore it is important to plan enough time for the Potsdam visit. If you only have a few days, you have to concentrate on some top sights in Potsdam. Our top 10 can help you with that.

Every visitor to Potsdam has their own preferences and can tailor their trip accordingly. Many visitors definitely want to visit Sanssouci Park with its countless castles. These include the Sanssouci Palace, the Orangery or the New Palace. You might also prefer to visit the historic old town with the remains of the city wall and the beautiful city gates and combine this with a shopping spree. And don’t forget the Old Market with many museums, the City Palace and the Nikolaikirche – for the culture lovers among the visitors.

Whether you are exploring Potsdam spontaneously or planning your stay exactly. With our list of the top Potsdam sights, your visit to Potsdam will be a fond memory. We have put together the ten highlights in Potsdam for you. With the following list, travel planning will be much easier.

Experience Potsdam for free on a bus tour with the Berlin WelcomeCard all inclusive and save € 17 on your day ticket. In addition, free entry to the Museum Barberini and many other Berlin attractions. Worth it. Inform now.

Here you will find a list of sights and highlights that you shouldn’t miss.

The first attraction on every list is Sanssouci Park. The approximately 290 hectare park with its many castles of different styles is one of the most beautiful park landscapes in Germany. Sanssouci Park is therefore very high on our list and should definitely be visited, even during a short stay in Potsdam.

The park is a creation of architecture and garden art, in which world-famous garden artists have realized themselves. Georg Wenzeslaus von Knobelsdorff, Heinrich Christian Eckstein, Peter Joseph Lenné and Gottlob Schulze were among those who worked on the construction, expansion and redesign.

In Sanssouci Park you will also find some of the most important sights of the city of Potsdam.

The highlight of every Potsdam trip is Sanssouci Palace in Sanssouci Park. The summer palace of Frederick II with the famous vineyard terraces is the main attraction and will enchant you. Take a nice photo on the stairs to the castle. If you want to see the castle from the inside, it is best to secure online tickets in advance. You can thus avoid long waiting times.

Another attraction of the park is the orangery or the so-called orangery castle. The orangery was built between 1851 and 1860 by Persius on behalf of Friedrich Wilhelm IV. The Italian Renaissance is reflected in the 300 m long building. The castle has a very special charm and also offers a beautiful view of the park.

Frederick the Great had the small Chinese pavilion – the Chinese tea house – built around his summer palace Sanssouci, around which life-size, gilded sandstone figures of musicians and Chinese musicians are grouped. For many, this exotic building is a special highlight of the park. There is something hidden in the park.

2. New garden with Cecilienhof Palace and the Marble Palace

After the Sanssouci Park, the New Garden is another sight that should not be missed. The 102.5 ha New Garden in the north of Potsdam borders the Holy Lake and the Jungfernsee. Friedrich Wilhelm II had a new garden created on this area from 1787. Hence the name. In the New Garden you can find some important Potsdam sights. Among other things, the Cecilienhof Palace, which was built in 1913-1917. The castle is located in the northern part of the New Garden. Other sights in the New Garden are the Gothic Library and the Marble Palace.

3. Historic city center with its city gates and the Dutch Quarter Potsdam | Top sights in Potsdam

A visit to the historic city center should definitely be planned. There are many sights here, which are also easily accessible on foot. Worth mentioning are the Potsdam city gates that surround the city center. The Brandenburg Gate in the west is a particularly attractive photo opportunity. In addition, the Dutch Quarter, a rarity in Potsdam, is located in the city center.

The four blocks through Mittel- and Benkertstraße with the 134 red brick houses form the Dutch Quarter. The district was built between 1734 and 1740 as part of the second expansion under the direction of the Dutch architect Johann Boumann. In this well-known sight many small towns, shops and restaurants invite you to visit.

Tip: The Christmas market in Potsdam’s city center should definitely be visited at Christmas. It goes from Luisenplatz (Brandenburg Gate) via Brandenburger Strasse to St. Peter and Paul Church.

The Krongut, which was renovated in 2002 or “Italian village” as it was called by King Friedrich Wilhelm IV. The Krongut Bornstedt is also one of the important Potsdam sights. It used to serve as a country residence for the Prussian nobility. The Italian architectural style of the crown estate is characteristic. There are numerous events throughout the year that invite you to visit. Even so, the Krongut Potsdam should be planned during a visit.

The Old Market in Potsdam’s city center houses some of Potsdam’s sights. With the reconstruction of the City Palace and the Barberini Museum, the Old Market has become the focus again. In addition to these two sights, you will also find the Old Town Hall, the Potsdam Museum and the Nikolaikirche.

Tip: Make a tour of the tower and enjoy the view over the city of Potsdam.

From 2013 to the end of 2016, the Barberini Palace, which had been destroyed in the war, was largely restored to its original appearance as the “Museum Barberini” art house. Potsdam has got back a wonderful sight.

The Barberini Palace was originally built under the designs of Carl von Gontard under the Prussian King Friedrich II from 1771 to 1772 as a classicist-baroque town house. The aim was to give the old market the appearance of a Roman square. Today you can visit changing art exhibitions in the Museum Barberini. You can find out more about the program here.

The original Potsdam City Palace was largely built until 1752 according to plans by the architect Georg Wenzeslaus von Knobelsdorff with the cooperation of the owner Friedrich II. It was the most important building in the city center of Potsdam until it was destroyed in the city center. The external reconstruction was inaugurated in 2014 as the seat of the Brandenburg state parliament. The very simple, functional interior was designed by Peter Kulka. Be sure to visit the Potsdam City Palace with the famous Fortuna portal.

The seasonal amusement park “Filmpark Babelsberg” is located in the Babelsberg district of Potsdam. The theme park has over 20 film-specific attractions, four shows, a 4D and XD cinema, original backdrops and exhibition areas on film and film craft. A nice visit and great attraction for young and old. Among other things, there was also the Harry Potter exhibition here. Allow enough time for this.

The Potsdam churches are also countless sights of the city. They can all be easily linked on foot to a tour of the city center.

The classicistic Nikolaikirche, designed by Karl Friedrich Schinkel, was built in 1830/1837 instead of the baroque church that burned down in 1795. It stands on the Old Market in Potsdam, next to the Old Town Hall and the Potsdam City Palace and is one of the landmarks of Potsdam. The tower tour offers a great view of the city of Potsdam.

The Catholic Church of St. Peter and Paul at the end of Brandenburger Straße (east). It was completed in 1870 and served both the Potsdam parish (which today belongs to the Archdiocese of Berlin) and the Catholic soldiers stationed in the city. It has had the status of a provost church since 1992. The Dutch Quarter is right next to the church. Combine both sights when you visit.

The garrison church or court church of Potsdam, built between 1730 and 1735, was an evangelical church in the center of Potsdam. With its almost 90 meter high tower, it was not only the tallest building in the city but also a landmark that was visible from afar. The church is considered a major work of baroque church architecture in Central Europe. It has been rebuilt since 2017. The tower is currently being built, making it one of the city’s most visible sights.

Lindstedt Castle was built under Friedrich Wilhelm IV between 1858 and 1861. It was created according to drawings by Friedrich Wilhelm IV. By Ludwig Persius, Ludwig Ferdinand Hesse, August Stüler and Ferdinand von Arnheim. It was to serve as a retirement home. Today the asymmetrical villa construction is used for events (e.g. weddings).