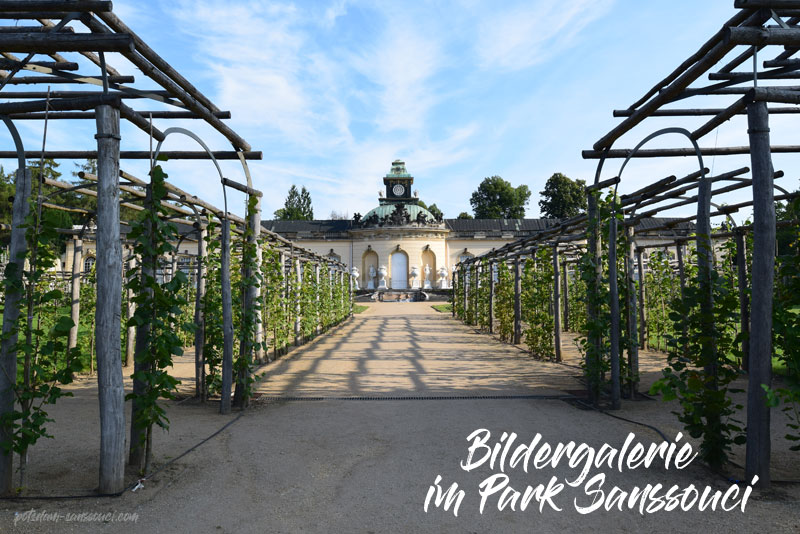 Picture gallery of Frederick the Great

Frederick the Great commissioned master builder Johann Gottfried Büring to build the picture gallery. Instead of a greenhouse for tropical fruits – which previously stood on the site – he had a long, single-storey building painted yellow built. The model for this were the new chambers, which were built west of Sanssouci. The picture gallery is the counterpart to this and, together with Sanssouci Palace, is part of a three-part building ensemble.

There is a dome in the middle of the picture gallery. It contains a group of eagle and snake fighting by Benjamin Giese and Friedrich Jury. On the garden side there are 18 marble statues between the floor-to-ceiling windows.

Interior design of the picture gallery in Sanssouci

The picture gallery is beautifully designed inside. The gallery hall contains richly gilded ornamentation on the slightly vaulted ceiling. The color of the floor matches this. This consists of rhombic pattern of white and yellow marble of Italian origin. The walls are green.

There are numerous precious paintings – close together – in gilded frames.

There is another gallery to the east, adjacent to the elongated gallery hall. It is the cabinet for small signs for small format paintings.

Works in the picture gallery in Sanssouci

In the early years, Frederick the Great preferred contemporary French rococo art. After 1740 he focused more on historical paintings. These were mainly works of the High Renaissance, Mannerism and Baroque, mainly by Italian and Flemish artists. In the meantime, the collection consisted of almost 180 top works. He bought most of them specifically for this purpose. Today, visitors can still marvel at over 140 top-class paintings from the 16th to 18th centuries in the gallery.

Further information can be found in the following literature: