The New Palace is located on the west side of Sanssouci Park and is one of the park’s great attractions. In this article we would like to introduce you to the baroque palace.

The so-called “Fanfaronade” was built between 1763 and 1769 on the occasion of the Prussian Seven Years War. Builders for Frederick the Great included Gottfried Büring, Heinrich-Ludwig Manger and Carl von Gontard. The beautiful Rococo building stands in the west and forms the end of the park here. The drum dome with the gilded figures of the Three Graces, who wear the Prussian crown on a cushion, can already be seen from a distance. The castle was Frederick’s last creation.

It is the largest castle in the park with numerous outbuildings. However, Frederick’s last creation is not a main palace for the king, but a palace for his guests.

King Frederick II of Prussia only used the castle for short summer stays. During this time he received his relatives from the German and European royal houses. The rest of the year the castle was empty.

The name “Fanfaronade” (boasting, showing off, trumpeting around), as Frederick himself called the castle, also explains the reason for the building. The New Palais is too

„to be understood as a demonstration of the economic and intellectual potency of Prussia after a war against all of Europe“ (Dr. Alfred Hagemann, © 2011, damals.de).

But the castle had one more purpose – it was opened to visitors. And it still is today. It was not until Kaiser Wilhelm II later made it his summer residence.

The New Palace was commissioned by King Frederick in the first half of the 1750s. The building plans were drawn up by Büring and Manger on the basis of sketches by King Frederick. Originally, the palace was to be built on the southern axis of Sanssouci Palace on the Havel. The Seven Years War changed the plans. On the one hand, the start of construction was delayed and, on the other hand, the palace was relocated to the western end of the park’s main avenue.

The inauguration of the castle took place on July 19, 1768. It was later supplemented by numerous extensions. Today communes, farm buildings, side wings, coach houses, colonnades and a triumphal gate belong to the palace complex. The completion is therefore dated to the year 1769.

The New Palace is a baroque palace and consists of a three-winged corps de logis (residential wing) around a courtyard with low side wings. The three-wing system has a front length of 220 meters. The facade is characterized by a reddish brick pattern and fluted Corinthian pilasters made of sandstone in colossal order. The red brick was only painted on for cost reasons.

Opposite are two communs. These farm buildings were connected by an underground corridor and were used to accommodate the servants, kitchens, entourage of guests and the court administration. They are also connected by a semicircular colonnade. They form the splendid conclusion of the park.

„Originally, the Communs were also supposed to block the view of the swamps behind the park.“

The middle section of the two-and-a-half-storey building – with a mezzanine – is crowned by a huge, functionless 55 meter high main dome. The Three Graces group is located on the dome. The dome is only used for architectural decoration and has no other purpose. It does not contain any space.

The two single-storey pavilion-like side wings have an L-shaped floor plan. They also each have a dome.

Over 400 large figures and sculptures are placed on the balustrades and on the pilaster pedestals, depicting scenes and figures (gods and demigods) from ancient mythology. Several sculptors and dozens of stonemasons worked on it for six years.

Rooms of the New Palace

Due to its size, the palace contains several rooms and halls. The building has more than two hundred rooms. There are over 300 paintings by Italian, Dutch and French artists.

In the middle of the building there are two ballrooms one above the other. Galleries are connected to the garden side in the south. These lead to the royal apartment on the ground floor and to the rooms of the Prince of Prussia on the first floor. There are also two apartments on the front of the courtyard.

The southern side wing facing the Communs houses the palace theater on the upper floor. Underneath are guest rooms.

The princely quarters, which were used for receptions, connect to the central halls in the north. The high northern side wing was used by the siblings Prince Heinrich and Princess Amalie. The low north wing was used to accommodate the escorted ladies and gentlemen of the guests.

Later there were some conversions, modernizations and conversions of rooms. So, for example, Frederick Wilhelm III. a private apartment in the apartment of the Prince of Prussia. Further changes followed each time the user changed.

In summary, the New Palais houses the following rooms:

Vestibule and grotto or shell hall

As a visitor, you first enter the vestibule. Then you come to the grotto or shell hall.

Over 20,000 different minerals, ores, fossils, shells and snails, rocks and artefacts adorn and decorate the garden room designed as a grotto. The hall was originally designed a little more simply, but the walls were further enriched with minerals, fossils and semi-precious stones in the 19th century.

The Tamerlanzimmer, which got its name from the wall-filling painting (by Andrea Celestis) in it, adjoins the “Grottensaal”.

The marble gallery, flooded with light due to its position to the east towards the park, borders the grotto or shell hall to the east. It leads to the blue chamber. This painting cabinet probably served as a waiting room and lounge, for example to wait for a concert. The concert room adjoins the Blue Chamber. This was based on the concert room in Sanssouci Palace.

The king’s apartment is adjacent to the music room and includes a bedroom, pink chamber, writing cabinet and library. There is also a small dining room and a small reading cabinet. The apartment, including the furniture, was completed in autumn 1765.

The two princely quarters lay one above the other in the northern residential wing and were accessible via separate stairwells. Three large rooms were intended for public use, followed by a concert room and a small cabinet. There are also private rooms. These included anteroom, painting and writing cabinets, rest rooms and bedrooms.

Apartment of the Prince of Prussia

The apartment of the Prince of Prussia was above the royal apartment. It consisted of only three rooms and, considering the size of the castle, was very small in terms of area. It consisted of an anteroom, a bedroom and a cabinet.

The marble hall is the main hall and goes back to an idea by Carl von Gontard. It resembles the marble hall of the Potsdam City Palace. It lies above the grotto or shell hall and was designed for the presentation of large-format paintings. The large wall surfaces are structured by Corinthian pilasters. The floor is made of native marble from the rich Silesian deposits. The ceiling is adorned with a large ceiling painting by Amédée van Loo: “Gods meal with the introduction of Ganymede to Olympus”.

To the south of the Marble Hall is the Upper Gallery, which is furnished with six large wall paintings of Italian Baroque painting.

Palace Theater in the New Palace

The castle theater is one of the most beautiful still preserved theater rooms from the 18th century. It was realized in the form of an amphitheater. There was also no royal box. Frederick is said to have sat in the front row himself.

In 1832 Felix Mendelssohn’s Bartholdy’s music for “A Midsummer Night’s Dream” was premiered here in the theater.

The New Palace also has a large number of other rooms. The red damask chamber, the bar room and the oval cabinet should be mentioned in particular. All rooms have unique features, are decorated with paintings or have special furnishings.

Tickets are only available on site at the cash desk

Further information can be found at https://www.spsg.de/schloesser-gaerten/objekt/neues-palais/ 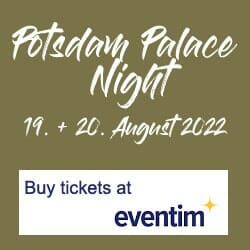